The Gap Holding Agriculture Back
November 8, 2022 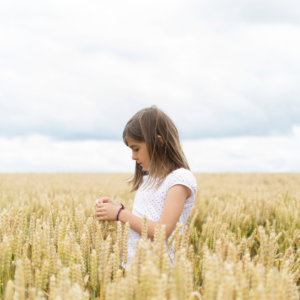 According to a 2017 report by Plan International, by five years of age girls have already begun to develop self-limiting beliefs. This means they stop believing that as a girl they can be or do anything. These insidious, subtle thoughts, often unconsciously influenced and cemented by family or society, slowly but surely, heap heavily like grains of sand in an hourglass. This heap of doubt manifests into default thinking that they cannot do something, and so, unfortunately, they often won’t.

This self-limiting phenomenon was coined the Dream Gap by the marketing firm BBDO during a campaign for Barbie™ in 2018. This gap is the result of a combination of barriers that deny or impede girls from achieving their dreams and realizing their full potential. These barriers drive wedges throughout girls’ lives, seeding their self-confidence with doubt, influencing what experiences they are or are not exposed to, and sometimes dictating learning choices. Those wedges create an ever-widening gap, resulting in a self-limiting feedback loop that causes dreams to shrivel up and die.

Ultimately, the combination of gaps girls and women experience throughout their lives (along with the early onset dream gap, women are also subject to the gender wage gap, the confidence gap, the stress gap of emotional labour, and several other gaps at various stages of their lives) concoct a witches’ brew of poisonous beliefs that, when added to stereotypes and overt or implicit gender bias, affect a girl’s trajectory along her career path.

So why does it matter if girls do or don’t do something? Doesn’t that mean they’ll just choose to do something else instead? In an industry like agriculture where technology, a pandemic, labour shortages, and consumer preferences are quickly changing food systems, we’ll need an all-hands-on-deck approach to find solutions to these many challenges.

The 2017 federal budget identified agri-food as one of Canada’s six innovative sectors considered to have the potential to stimulate economic growth in Canada and it continues to be a driver of economic strategy. Furthermore, research has repeatedly shown how developing countries can exponentially increase their economic capacity by involving women in the workforce. The same can be said for Canada’s agriculture industry: if we’re looking to find innovative ways to grow the industry in the Fourth Industrial Revolution so that agriculture can continue to be an important source of income for our country as well as help feed the projected 9 billion people on earth by 2050, shouldn’t we be capitalizing on every resource we’ve got?

Just as they were during WWII (and other critical inflection points in history), women are key to moving the economy forward. It’s wasteful and downright ridiculous to not take full advantage of the skills and knowledge of half the population. The Apples and Googles of the world didn’t succeed because they rely on one person’s expertise and skills; they succeed by leveraging the combined knowledge and skills of a diverse team.

Caroline Riseboro, President and CEO of Plan International Canada, noted in the article “The Dream Gap Stands Between Every Girl and Her Full Potential”, that one in four people in Canada feel that their gender has been an obstacle in attaining their goals, dreams, and career aspirations. In the ‘Global Women in Agriculture’ study, conducted by Corteva Agriscience across 17 countries in 2018, sixty-one percent of Canadian women agreed with the statement that “gender discrimination is an issue in the agriculture industry.”

In late 2019 I conducted an online survey which explored the pace of change for women in agriculture, the gaps that affect their career choices and trajectories, and their experiences growing up and working in agriculture.

When asked “On a scale of 1-10, with one being not at all and 10 being extremely fast, how quickly would you say women are advancing in the agriculture industry?”, the majority responded with a seven. However, when asked “Do you feel that the pace of change regarding women in agriculture is keeping up with other industries or lagging behind?” only 14% said “keeping up” (from possible responses of “not sure”, “somewhere in the middle”, “keeping up”, “lagging behind”).

A minuscule 0.05% had ever heard of the Dream Gap. One could argue that living in “ignorant bliss” never hurt anyone, but if we’re looking for an answer as to why more girls are not entering the ag industry this phenomenon is a likely cause.

Canada has taken enormous steps over the last 30 years when it comes to gender equality, but there is still a lot of awareness, education, policy changes, and societal shifts that need to happen. With that goal in mind, let’s explore how the Dream Gap is holding agriculture back and what we can do about it.

Historically, men enter the agriculture profession through patrilineal property transfer (father to son) which makes it difficult for women to acquire property. Women historically came into agriculture through marriage where their role was viewed in traditionally patriarchal, rural societies as a support mechanism to the farm and its owner, the man. Her work typically consisted of domestic [household] tasks, primary childcare, administrative work, and daily chores, like feeding small animals or milking – none of which involve critical strategic decision-making about future business growth.

While all these tasks were, and continue to be, legitimate and valuable contributions to the family business – without which, the farm could not function as an efficient whole – many women now prefer not to be pigeon-holed into these support roles without remuneration and/or especially if they’d much rather contribute to the business in a more strategic development manner.

“The Dream Gap: Australian Girls’ Views on Gender Equality”, a 2017 report published by Plan International, notes that messages received in the home setting is one of the key contributing factors to whether teenage girls feel treated as an equal. The report found that between 10-14 years of age, 61% of teenage girls said they felt equal, but this number fell sharply between age 15-17 to 36%.

If the practice of patrilineal succession persists, girls will continue to be given less valuable on-farm tasks which “progressively and ultimately contribute to her being pushed further away and out of the business” highlights the 2018 report “La relève agricole féminine au Québec : Remuer ciel et terre.” The report concludes that ultimately, constricting women and girls to traditional support roles adds to their invisibility and consequently makes it difficult for them to gain recognition of their contributions by families and society. Feeling invisible, unrecognized, and valueless invariably leads to “why bother”, which augments the brain drain of some of the best talent and knowledge from the ag industry – leaving us to wonder which of their innovative ideas might have built up our industry.

I’ve dubbed this devaluation and invalidation of a girl’s/woman’s role “proof of purchase”: the  idea that girls/women must somehow prove that they are capable of playing an important role in an industry that is still perceived as traditionally masculine. “Important” in this sense does not translate into simply a support role, but rather as physical strength, mechanic ability or business acumen.

Receiving high calibre opportunities is often contingent upon whether they can provide proof that they’ve done it, that they have the stamina to do it. But the whole idea of proving one’s ability for a job based on, as Justice Ginsberg said, immutable characteristics that bear no relationship to ability, is farcical. There are small statured male farmers who are exceedingly capable and farm men who are too overweight to do some of the physical tasks required. There are farm men who know nothing about mechanics and outsource everything and men who grew up around cows but are terrified of them.

Being devalued and invalidated purely on the basis of gender tells us that there are still many systemic barriers that need be addressed if eager, capable, experienced members of an industry need to constantly “prove” that they have a legitimate right to be there in order to be offered equal and valuable opportunities, to be seen and heard, and have their contributions recognized.

“There is no use telling a girl she is empowered and can change the world if the structure and systems are not there to support her.”
– ‘The Dream Gap: Australian Girls’ Views on Gender Equality’, Plan International, 2017

Many girls aren’t given adequate opportunity to explore their passion for agriculture or, worse still, are actively dissuaded from doing so – just as some parents surreptitiously try to dissuade their sons from playing with dolls or taking ballet. Sometimes parents justify their tactics under the guise of “desiring better for their kids” (especially dads with daughters). But then there are girls who are told that they can be and do whatever they want – only to find out as they pass from optimistic childhood days that those same people will overtly or covertly dissuade them.

This double standard – when a rule or principle is applied unfairly in different ways to different people – means that we are still, consciously or unconsciously, treating our girls differently than boys when it comes to career paths. It means that society tells girls one thing but does another. Our actions don’t bear up the strength of our words, the structure crumbles, and previously elevated dreams are left in the rubble.

“Don’t just tell girls they can achieve their dreams. Show them by actively helping to bridge the dream gap.”
– Caroline Riseboro, President and CEO of Plan International Canada

There are many ways we can close the Dream Gap. Here a few to get you started:

Things are changing, albeit slowly. Almost daily on Twitter, I see men (and women) of my generation (45 and under) sharing posts of their young daughters working alongside them on the farm. They express inspirational – and aspirational – words of encouragement, appreciation, recognition of value, and “we can do better”. Maybe we’re finally ready to acknowledge the advantages of soliciting multiple perspectives, leveraging whatever skills and knowledge are readily available, and that there is no relationship between sex and ability. I hope that my eight-year-old daughter will have “equal opportunity to aspire, achieve, participate in and contribute to society based on [her] individual talents and capacities”, as Justice Ginsberg so ardently expressed.

I’ll end with a cautionary reminder from the 2008 report by the Commission sur l’avenir de l’agriculture et de l’agroalimentaire Québécois (the Commission on the future of agriculture and agrifood): “[A]t a time when agriculture is being called upon to renew and diversify its practices [we must] take into consideration the multifunctional, plural, and entrepreneurial characteristics in order to ensure its survival.”

Closing the Dream Gap can only make agriculture better.

This blog originally appeared here. You can read more blogs like this here.