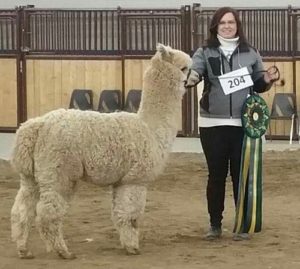 by Angela Lovell.
The alpaca sector is a niche of Canadian agriculture that is run almost exclusively by women and highlights the way in which women are helping to diversify the industry.

“A lot of alpaca people are women, and part of that is because alpacas are small animals and not physically difficult to maintain,” says Sandra Brown, owner of Enchanted Grove Alpacas at Komarno, Manitoba about 60 kms. north of Winnipeg. “Most of agriculture is primarily run by men, so I’m not punching through the same barriers, as an alpaca owner, as I would be in food production or all of the other segments of ag.”

There are around 100 alpaca farms across the country, and more women have been starting new alpaca farms over the past few years. That is partly because alpacas are environmentally-friendly animals to raise, and that’s especially important to younger women farmers.

“Alpacas are supporting of the needs of nature versus creating damage to the earth,” Sandra says. “That’s becoming important with the growing interest in sustainable, eco-friendly, regenerative farming. It’s easier to farm that way with alpacas than other livestock.”

Finding MWAF and some shared values

Sandra first met Laura Lazo, Chair and co-founder of Manitoba Women in Agriculture and Food (MWAF) a few years ago they realized they had a lot in common. Both are committed to highlighting women’s contribution to the diversification of agriculture.

“MWAF supports all women in agri-food, regardless of their background or role and advocates for the contribution women make,” says Laura. “Women like Sandra are contributing to diversification and employment in the industry. They are entrepreneurial, successful and work toward their long-term economic security.”

Sandra decided to join MWAF, realizing that they share similar values, especially to advance women in the ag industry and support their career and business aspirations.

Sandra and her husband, Clint had no background in ag at all. Sandra was a hairdresser in Winnipeg for 20 years and Clint works for a major concrete manufacturer. When Clint’s job meant a move from Winnipeg to Portage la Prairie, they bought a small acreage that they moved to with their children and two Great Pyrenees dogs. Once the kids had grown up and moved away, the dogs were bored, so the couple decided to get a couple of goats to give the dogs a job guarding them. Instead, they found an ad on Kijiji for an alpaca, and discovered a whole industry that they had never known existed.

“We looked into it and bought our first set of five show alpacas,” Sandra says, adding that her husband was more enthusiastic about the animals that she was at first. “He totally fell in love with the animals. We started travelling across Canada to different alpaca shows and met other alpaca farmers. We made mistakes, but we learned, found a good veterinarian, learned some more.”

The farm just kept getting bigger and eventually outgrew their small acreage, so they recently moved to an 80-acre farm at Komarno, where Sandra produces a number of handmade alpaca products.

“I’ve been knitting for almost 40 years, so I get yarn made and turn that into either wearable art or slow fashion,” Sandra says. “We’re in Manitoba; it’s cold, and alpaca is really soft and warm, so it creates a very specific, marketable product for winter. But it also creates other products that aren’t necessarily for winter.”

“It’s regenerative farming because I’m using more of what these animals can produce,” Sandra says. 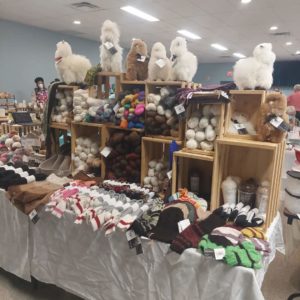 Sandra’s farm store sells a range of items from alpaca socks and mitts, alpaca bears and stuffies to smaller items like finger puppets, keychains and pen toppers. She offers felted dryer balls and insoles made from the secondary fibre, and sells salted soaps that are made by another local person. She’s now working to develop an online store, as currently most of her sales are through farmer’s markets, craft sales or from the farm, where she also hosts tours.

In fact, while still at her former farm site, Sandra hosted a tour for MWAF members to raise awareness about farming for people who don’t have a farm background, and highlight the opportunities for women in the ag sector.

“When MWAF approached me to do the farm tour, I felt accepted and supported by their target audience and their goals,” Sandra says. “We fit very well together in the values that MWAF has.  I can see we have mutual goals, and it’s become a resource that’s invaluable to me right now and will be in years to come.”

Not only does Sandra share MWAF’s values, but she has discovered that the services it offers have been invaluable to her business. Although still working off the farm as well, Sandra has a lot of exciting ideas and plans to expand her business. The key to making it all happen has been developing a solid business plan, which she has done with MWAF’s help. MWAF offers its members a subsidy towards the cost of a four-week, online business plan workshop in partnership with the Women’s Enterprise Centre of Manitoba.

“The subsidy was certainly a help,” Sandra says. “I took the course so that I could write my business plan myself, with the support of an organization that I am comfortable with and that is very competent, instead of paying someone who doesn’t understand the alpaca industry to do it for me.”

Expanding into agri-tourism and value-added products.

Sandra plans to diversify the farm and business in a number of ways. She and Clint are increasing the herd size from 45 to 120 animals over the next five years to produce more products.  She is also starting to breed Sarplaninac, livestock guardian dogs from Macedonia, both to protect their own herd and sell to other alpaca farms as guardian animals.  She wants to expand on the farm tours and offer an agri-tourism program to increase people’s awareness and knowledge of what an alpaca is, and the many uses for their wool.

“We will be running tours like we did with MWAF but on a much larger, educational scale,” Sandra says. “That tour actually helped me write the program of what the plan for the agri-tourism component of our business will be.”

She is planning a new on-site farm store and wants to offer knitting, spinning and weaving courses. In the longer term, the couple are looking at  purchasing a local textile mill to produce their own yarns from exotic fibres like alpaca and angora.

Sandra has a background in public relations and communications, which she studied at Kingston and St. Lawrence College. She has a flair for marketing and believes that networking is essential to her business. MWAF has helped her to both make new connections and share her own.

“We’re no one without each other, so that’s definitely a goal we have together, that whole networking aspect,” she says. “I have a lot of contacts in my specific industry, and if someone were interested, I can easily connect them and grow that network of people.”

Sandra says that for anyone interested in advancing women in ag, needing help to find a career in ag, wanting some business support or who are building their networks, MWAF is a great place to start.

“They really helped me develop what my farming diversity was going to look like,” Sandra says. “They’ve supported me and opened my eyes to things I may or may not have seen as possibilities. They have helped me see what my farm and business potential could become based on the situations where they were involved in decisions I made.”